In 2011, the remains of a U.S. Marine killed on Tarawa in 1943 were found on the Island of Betio (now known as the Republic of Kiribati). Based upon his identification and historical research, History Flight (a non-governmental organization dedicated to finding MIA personnel) located witnesses who knew the exact recovery location of this recently found Marine. This area then became the intense focus of a History Flight investigation.

In late June 2015, Mr. Mark Noah of History Flight notified the Defense POW/MIA Agency (DPAA) that his group had found an unmarked burial trench on Betio Island. This was later determined to be Cemetery #27 (aka ‘The Lost Cemetery’). It had on it, at one time, a monument erected with a memorial plaque that read: “near this site are the officers and men of the 2nd US Marine Division whose names are inscribed here…”. Their names were followed by the line, “And Sixteen Unknowns”.  Sgt. James Joseph Hubert was ultimately one of those “Unknowns”.

In July 2015, History Flight turned over custody of the remains of 35 Marines to a DPAA Laboratory representative, who escorted them back to Hawaii. Sgt. Hubert’s remains were part of that group of Marines. His still-legible dog tag (ID Tag) was found with him. There were nearly complete dental remains, as well as strong forensic anthropologic evidence present. Most convincing was the DNA evidence. Samples taken from his sister, his nephew and his cousin, matched against a sample from Sgt. Hubert’s tibia, provided the required proof of identity. The DPAA concluded in May 2016 that the remains found were indeed those of Sgt. James Joseph Hubert.

SGT Hubert had no birthmarks or tattoos noted in his medical records. He did have a one-inch scar on his left knee. SGT Hubert’s USMC photograph depicts a marked right nasal deflection. His cap/hat size is unknown. He had brown eyes and was unmarried. SGT Hubert’s official USMC photograph does not contain a height chart to confirm his listed height of 68 inches.
SGT Hubert’s last recorded dental examination was on 24 August 1943, less than three months before his death, when his chart noted he had ten fillings, no extractions, and no wisdom teeth present.
JPAC noted that a “Family Reference Sample” (DNA) was not in their files as of May 2012.

Other casualty specific information: SGT Hubert was born in Duluth, Minnesota. At the time of the 1930 census, James was living with his parents, Wallace and Mary Hubert, and a younger sister in Duluth, Minnesota. His father worked as an assistant superintendent in a warehouse.
James enlisted in the U.S. Navy Reserve on 5 September 1938 and was given the rank of Apprentice Seaman (AS). He served a two week tour of active duty on board the USS Wilmington from 23 July through 5 August 1939. The Wilmington was a Spanish American War era gunboat that was stationed on the Great Lakes for the purpose of training naval reservists.

As Hubert was promoted to the rank of Seaman Second Class (S2c) and applied for discharge from the Naval Reserve for the purpose of joining the U.S. Marine Corps. His application was granted and S2c Hubert was granted a Good Conduct Discharge by the Commanding Officer of the 50th Division, U.S. Naval Reserve in Duluth, Minnesota.
On the same day S2c Hubert’s discharge was granted from the Naval Reserve (16 January 1940), James enlisted in the U.S. Marine Corps in Minneapolis, Minnesota and was assigned the rank of Private (PVT). At the time of his enlistment, PVT Hubert listed his civilian occupation as “laborer” and listed his residence as Duluth, Minnesota. PVT Hubert listed his father, Mr. Wallace L. Hubert of Duluth, Minnesota, as his next of kin. He completed all of the necessary paperwork to be eligible for U.S. Government life insurance.

PVT Hubert completed his Marine Corps basic training at the Recruit Depot Detachment in San Diego, California where he qualified as a “Marksman” with the Springfield Model 1903 .30-06 caliber rifle on 15 February 1940.

After basic training, PVT Hubert was assigned to the Headquarters and Service Company, 6th Marines, stationed in San Diego, California.
On 1 April 1940 PVT Hubert was briefly assigned to Company B, 2nd Battalion, 6th Marines before being transferred to Company H, 2nd Battalion, 8th Marines stationed at Camp Elliott, San Diego, California. On 16 September 1940, PVT Hubert was promoted to Private First Class (PFC) and on 17 January 1941, PFC Hubert re-qualified as a “Marksman” on the rifle range. PFC Hubert was promoted to Corporal (CPL) on 19 November 1941.

In January 1943, CPL Hubert and his company were withdrawn from Guadalcanal and transported to Wellington, New Zealand for a period of rest, refit and training in preparation for the invasion of Tarawa. From 18 April through 22 April, CPL Hubert was sick in the Field Hospital with an unknown illness or injury. CPL Hubert was again sick in the Field Hospital on 1 July through 8 July 1943 with an unknown illness or injury. He was promoted to Sergeant (SGT) on 20 July 1943. On 10 October 1943, SGT Hubert extended the period his enlistment for an additional two years.

SGT Hubert’s unit (H Company, 2nd Battalion, 8th Marines) was designated to land on Red Beach 3 during the invasion of Tarawa. His battalion was transported from their training bases in New Zealand to Tarawa on board the USS Heywood, APA-6.

At 0917 hours on the first morning of the battle (20 November 1943) 522 officers and men of the 2nd Battalion, 8th Marines began their assault against Red Beach 3. They were in multiple waves commanded by Major Jim Crowe and were carried in an assortment of both amphibious tractors (LVT) and “Higgins Boat” landing craft (LCVP).
Approximately 500 yards from the beach, the LCVPs crashed into the reef surrounding Tarawa and found that there was not sufficient water for them to float over the reef. The slower moving LVTs were able to crawl over the reef with their tank like tracks but they were under heavy concentrated fire from Japanese 70 mm anti boat guns on their left flank and other weapons, including artillery and multiple machine gun positions.

The landing craft carrying SGT Hubert’s company reached a point in line with and a only a few yards east of the head of the pier that jutted out from the beach. This pier was essentially the dividing point between Red Beach 3 and Red Beach 2 to the west.

At this point, the LCVPs became hung up on the reef and could go no farther. The ramps on the front of the LCVPs were lowered and Marines leaped into the water to begin the long wade to shore in chest deep water. Within minutes many were torn to pieces by artillery explosions and machine gun fire. One machine gunner in SGT Hubert’s company, PFC John Mohrlang, was blown backwards by an explosion in the water that tore off a portion of one of his lower legs. The dismembered leg floated past him as he attempted to maintain his balance by backstroking in the water. One of the ammunition carriers on PFC Mohrlang’s machine gun team (probably PFC Mike Mangan), who observed this macabre struggle, grimly continued his advance toward the beach, as he had been ordered to leave casualties to the rescue boats. PFC Mohrlang was soon pulled from the water by just such a rescue craft but he ultimately died on board the USS Monrovia from shock and loss of blood.125 PFC Mohrlang was buried at sea the next day.

Four out of the seven officers in H Company were wounded or killed.

SGT Hubert was able to reach the shore on Red Beach 3 on the first day of the invasion, 20 November 1943. Two LVT amphibious tractors from an adjoining company, Company E, 2nd Battalion, 8th Marines, managed to penetrate through an opening in the coconut log seawall and attack toward the Japanese airfield. Against an increasingly heavy crossfire, the Marines in the LVT’s managed to reach a small rise in the ground just south of the airfield’s northeast taxiway.
Other members of SGT Hubert’s company took positions behind the sea wall until they could organize an attack over the wall toward an aircraft revetment and several deep shell craters. During these attacks, casualties were heavy. By 1300 hours, SGT Hubert’s company held a line about midway between the seawall and the air field taxiway. At about 1600 hours, SGT Hubert’s company withdrew back to the seawall while American naval gunfire pounded the intervening ground for an hour. After the bombardment, SGT Hubert’s company surged forward and regained all the lost ground and some additional territory. By dusk, the unit dug into defensive foxholes in preparation for nighttime Japanese counterattacks.

It is likely that few in SGT Hubert’s company slept during their first night on Tarawa but the expected Japanese counterattacks did not materialize. At dawn, the units on Red Beach 3 began a day long series of short distance attacks into the interior of the island. Casualties were again heavy and only a little ground was gained during the entire second day of the invasion, 21 November 1943.
The specific circumstances of SGT Hubert’s death are unknown. His USMC Casualty Card notes his cause of death as a gunshot wound to the chest on 21 November 1943. This record also notes that SGT Hubert was “buried in Division Cemetery “, of which there were several on Tarawa. And finally, there is a memorial grave listed on the Casualty Card in Cemetery 33, which was not an actual burial site.

SGT Hubert is listed in Chaplain Willard’s log book on page 376 as KIA on 21 November 1943 but with no cause of death or burial location noted:
The Graves Registration Unit report of January 1944 and the island commander, CAPT C. B. Gould in his report of June 1944, both list SGT Hubert as buried at an unknown location rather than listing him as missing as was done with many other unrecovered Tarawa casualties. 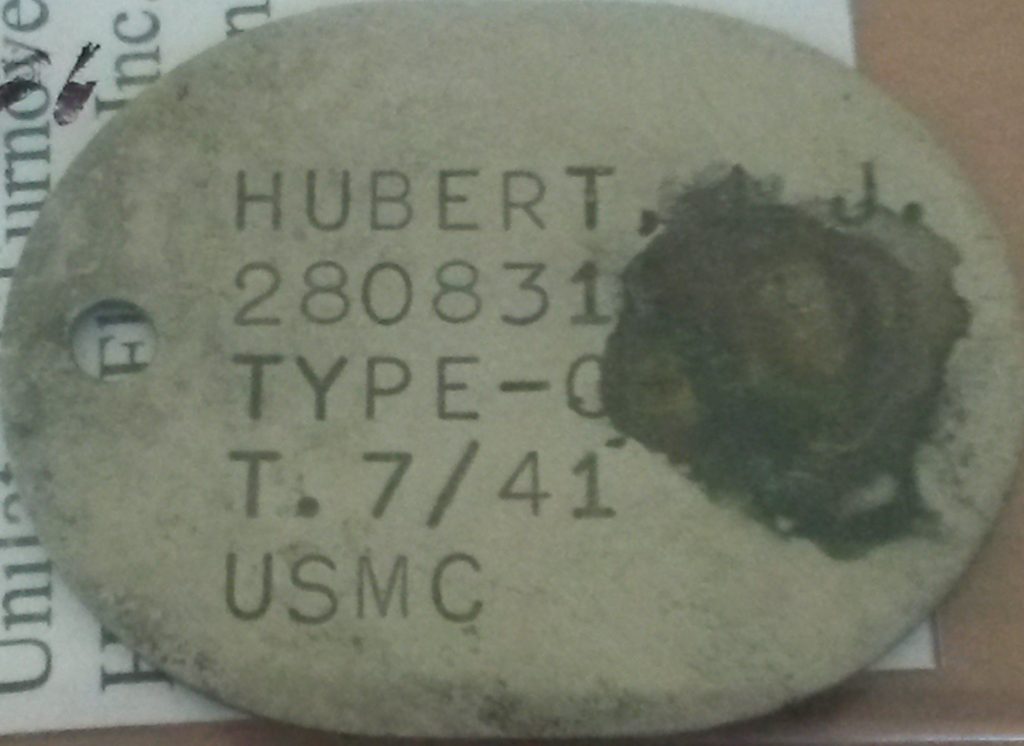