After the attack on Pearl Harbor on December 7, 1941, the United States and Japan were at war. In early 1942, Cpl. Hubert and his company embarked on the SS Matsonia from San Diego for transport to the South Pacific. They crossed the Equator and arrived at Pago Pago, Tutuila, American Samoa on January 20, and were assigned to garrison duty there. After several months of jungle warfare training, Cpl. Hubert and his company were designated to participate in the Battle of Guadalcanal in late 1942.

In early 1943, Cpl. Hubert and his company were withdrawn from the Guadalcanal Theater and transported to Wellington, New Zealand for a period of rest, refit and training in preparation for the invasion of Tarawa. In July James was promoted to Sergeant (Sgt.) and three months later he extended his enlistment for an additional two years, and thus never returned home to meet his baby sister.

In autumn of 1943, the U.S. Navy Pacific Fleet’s Central Pacific Campaign targeted the Gilbert Islands. The Gilberts offered the Pacific Fleet a platform from which to launch assaults on the Marshall and Caroline islands to advance the U.S. Navy’s Central Pacific Campaign against the Empire of Japan. The capture of Betio Island was considered essential to that campaign. Betio was located within the Tarawa Atoll of the Gilberts, about 2,400 miles southwest of Hawaii. The Island was little more than a sand bar, just large enough to support a small military airfield, and was thus the strategic objective.

The Battle for Tarawa

The Battle of Tarawa took place during the period of November 20-23, 1943.  Primary responsibility for the assault fell to the Second Marine Division, which was supported by a naval task force comprised of 143 ships, including aircraft carriers, battleships and transports. Sgt. Hubert’s unit, H Company, was transported from their training bases in New Zealand to the Gilbert Islands on board the USS Haywood, APA-6, to take part in the Battle of Tarawa, code named Operation GALVANIC.

The Battle of Tarawa was the first time in World War II that the United States faced serious Japanese opposition to an amphibious landing. Tarawa was heavily defended. For more than a year prior to the invasion, the Japanese had used more than 1,200 Korean slave laborers to fortify the island. The Japanese Army and Navy had more than 3,700 combat and construction personnel assigned to the island, including more than 2,600 first-rate combat troops.

Sgt. Hubert and the men of Company H were part of the first day’s invasion. At 09:00 am, after a period of intense naval and air bombardment, the Marines assaulted three primary beachheads (known as Red Beach #1, 2 and 3) on the north side of Betio Island. Low tides caused many of the landing craft to  became hung up on the coral reefs at the edge of the island lagoon, hundreds of yards from shore. Many Marines abandoned their landing craft, or were discharged prematurely, and attempted to wade ashore, only to become casualties long before reaching the beach.

The specific circumstances of Sgt. Hubert’s death are not known in detail. Along with other members of his Company H, Sgt. Hubert reached the shores of Betio Island (Red Beach #3) on November 20, and probably spent that night anticipating Japanese counter attacks that did not materialize. Three different documents list Sgt. Hubert as Killed in Action (KIA) on November 21. His UMSC Casualty Card states his cause of death as a gunshot wound to the chest, and notes that Sgt Hubert was “buried in Division Cemetery”, of which there were several dozen on Tarawa. His remains were not found in any of the known locations; several locations had gone missing with the passage of time. 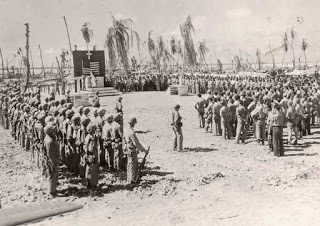 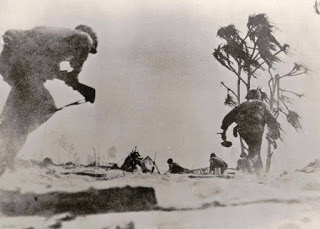